After statewide Public Hearing Workshops, DART listened to its riders and the public; as a result changes were made to the original proposal. The “Bold type” indicates a change from or an addition to the original proposal based on public comments. New schedules will be available online and on buses in early December. Schedule time changes will be adjusted on most routes to improve on-time performance and connections.

Route 4 –The 10:40 PM weeknight trip from Kynlyn will be discontinued due to low ridership.

Route 5 –The last weeknight departure from Christiana Mall (Target) will depart at 11:30 PM instead of 11:15 PM to accommodate employees coming from the Christiana Fashion Centre.

Route 8 –The 5:40 AM trip from Port of Wilmington and 11:17 PM from 9th at Grant St. will be discontinued due to low ridership; Saturday service will operate every 60 minutes instead of every 55 minutes to improve on-time performance.

Route 10 –The 5:24 AM trip from Amtrak Station and the 11:15 PM trip from Pennsylvania Avenue at Rising Sun Lane will be discontinued due to low ridership; Saturday service will operate every 75 minutes on all trips instead of varying between 60 and 75 minutes. The routing will be revised between DE 273 & 7 Park & Ride and University Plaza as a result of Comcast’s relocation from Wakefield Dr.

Route 13 –Based on public comment, early morning weekday service will offer a transfer connection with the revised schedule for Route 14.

Route 14 –The route will be extended from Lea Boulevard and Washington Street to Miller Road Shopping Center, and routing to the former Opportunity Center will be discontinued since facility has been relocated to another location south of Wilmington served by Routes 10 and 15. The schedule has been adjusted to address the routing changes and transfer connections have been improved.

Route 15 –The route will be split into two separate routes. Route 15 will continue to operate between Wilmington and Christiana Mall serving Southbridge, the DE 9 Corridor, Jefferson Farms, New Castle, Twin Spans Industrial Park, Creekwood Corporate Center, Reads Way and Del Tech. New Route 51 will operate on weekdays, providing service between Wilmington and Christiana Mall, serving Southbridge and the DE 9 Corridor, with new all-day trips to the Collins Park and Buttonwood Communities along with serving the DE 273 Corridor. Weekday service on both routes will operate every 60 minutes, with 30 minute service along the DE 9 Corridor between Landers Lane and Wilmington. Route 15 weekend service will remain unchanged. Route 51 will not operate on weekends.

Route 18 –The routing around Wilmington’s Amtrak Station will be revised to address safety concerns for buses turning from Front Street to Walnut Street and from Walnut to 2nd Street. The original proposal had the routing to Pike Creek follow King, Market, Shipley, Water and Orange Streets to reach 2nd Street with buses stopping at King at 3rdStreets and Market Street at Rosa Parks Drive. Based on public feedback and input from Operators, the routing is revised to continue serving Amtrak Station and operate via Front Street, Walnut Street, 4thStreet, Shipley Street and 2ndStreet. The bus stops currently served on 2ndat French and 2ndat King would not be served by Route 18, but would continue to be served by Routes 11 and 47 (2ndatFrench) and Routes 9, 11 and 47 (2ndat King). The bus will not serve the stop on King at 3rddue to turning safety concerns. The bus stop on Foulk Road at Windsor Hills Drive that was originally removed from service with the May 2019 service change will be restored due to public comment.

Route 28 –Saturday service will operate every 90 minutes instead of every 60 minutes to better address ridership demand.

Route 31 –Based on public comments regarding shift times at Bellevue Corporate Center and SEPTA train connections at Claymont Station, the 4:40 PM departure from Amtrak Station will depart at 4:30 PM.

Route 34 –Service to former Comcast building off of Wakefield Dr. will be discontinued, since Comcast has been relocated.

Route 42 –Leaving Downtown Wilmington, the route will use Washington Street to quickly access I-95 rather than following Delaware Avenue, Harrison Street and Pennsylvania Avenue and Jackson Street.

Route 43 –Rush hour service will be reduced to operate every 60 minutes due tolow ridership. Time changes are scheduled to improve connections with Route 301 at Odessa Park & Ride.

Route 45 –The routing around Wilmington’s Amtrak Station for trips leaving Wilmington will be revised to address safety concerns for buses turning from Front Street to Walnut Street and from Walnut to 2nd Street. The routing will instead travel via King Street and South Market Street to serve Amtrak Station via the bus stop on South Market Street at Rosa Parks Drive.

Route 46 –The 9:50 PM weeknight trip from Peoples Plaza will be discontinued due to low ridership.

Route 62 –Schedule times will be adjusted to provide better connections with SEPTA trains. The current discounted $1.00 fare will be proposed to increase to the regular DART fareof $2.00 for the May 2020 service change.

Route 64 –The route will be extended in both directions in efforts to increase ridership and productivity. From Fox Run, the bus will operate westward on US 40 to Peoples Plaza; and from Governors Square traveling eastward on US 40 to Wilton. The new route segments will serve new residential and commercial venues, along with providing transfer opportunities to reach Wilmington and Newark. Service spans will expand to operate from 5 AM until 10:30 PM. Current service through Glasgow Pines and Wellington Woods will be discontinued due to low ridership. The current discounted $1.00 fare will be proposed to increase to the regular DART fare of $2.00 for the May 2020 service change.

Route 106 –The route will be discontinued due to low ridership. Most locations served by Route 106 can be accessed by other DART routes. Routing adjustments or service improvements on Routes 105, 107 and 112 provide coverage for the Route 106 service area.

Route 107 –The route will be extended via Bay Road to serve the Kings Cliff Community. Based on public comment, new weeknight service will operate every 60 minutes until 9 PM.

Route 210:The route will be extended to serve Milford Industrial Park and the Plaza at Milford shopping center, with new stops at Brandywine Counseling & Community Services, and along US 113.

Statewide Bus Stop Discontinuations/ConsolidationsBased on zero or very low ridership or close proximity to other stops, 26 bus stop locations will be consolidated or discontinued. 22 locations are in New Castle County; 4 are in Kent County. Prior to the public hearing workshops, each bus stop was posted with a notice that the stop was proposed for discontinuation. Notices will be again be posted at the bus stops prior to removal on December 15. 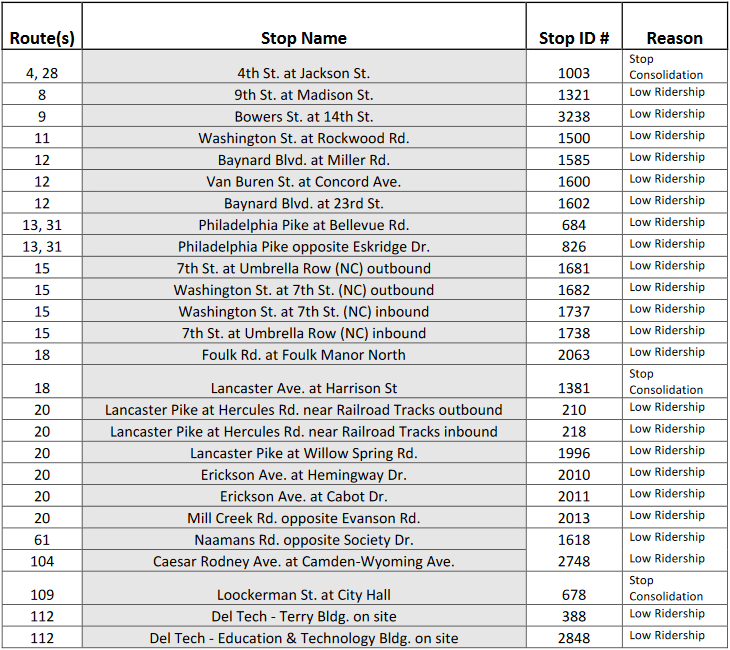