Our first Ride. Record. Reward! winner for November is Christina Farmer! Since 2013, Tina has been commuting to work by vanpool. When Tina started working in Dover, she heard about the option to join a vanpool. She jumped on the vanpool and has not looked back since!

Tina’s daily commute is from Ellendale to Dover. Tina says that her daily commute is her “me” time, where she can catch up on her emails, social media, and reading. This way, when Tina arrives home, she is rested and recharged to take care of her children! Over the course of each week, Tina takes 300 miles off the roads. That is a total of 1,200 miles off of the roads in just one month, and an estimated 14,400 miles in the course of a year – enough miles to make a round trip from Washington, D.C. to Chengdu, China! Since 2013, Tina estimates she has eliminated more than 57,000 miles off of the roads, which is enough to travel around the circumference of the equator approximately two and a half times! Go Tina! 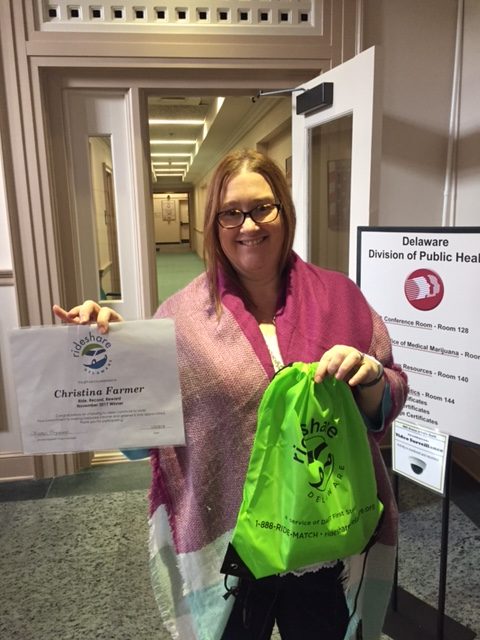 Our second Ride. Record. Reward! winner for November is Karen Jordan! Karen has been clean commuting for the last year and a half. Her daily commute is from Bear to Delaware. Every day, Karen travels a total distance of 34 miles round trip from her home to work. Instead of driving these 34 miles, Karen chooses a much cleaner and more sustainable mode of transportation. Karen takes the bus to commute daily to downtown Wilmington. In just one week, Karen takes 170 miles off the roads. That means in a month, Karen takes 680 miles off of the roads, and 8,160 miles off of the roads in a year. In her year and a half of clean commuting, Karen has taken 12,240 miles off of the roads. That is more than enough miles to make a round trip from Washington, D.C. to Sydney, Australia! Wow, go Karen!

We thank Karen and Tina for clean commuting! Keep up the good work!