Each workshop will begin as an open house (approx. 30 mins), allowing attendees to view proposed schedules, interact with staff, receive clarification, and fill out comment forms. The remainder of the workshop will include a presentation of the proposed service changes, followed by public testimony for those wishing to provide comments to the audience, and to the hearing reporter. Attendees may also provide comments privately to the hearing reporter during the open house or following public testimony.

For your convenience, a summary of proposed changes, specific schedules and bus stops eliminations are available for review online at DartFirstState.com, at the reception desks of DART Administrative Offices, and at the Wilmington, Appoquinimink (Middletown), Dover and Georgetown Libraries. For information on an alternative format, please call (302) 760-2827.

If an accommodation such as an interpreter for the hearing impaired or a language translator is needed, please call (302) 760-2827, one week in advance.

Bus Stop Consolidation – Based on zero or very low ridership, or in close proximity to another stop, DTC is
proposing the removal/consolidation of 25 bus stops throughout New Castle County (see below).
Schedule times on some routes would be adjusted to improve on-time performance and connections.
Please visit DartFirstState.com for specific route schedules.

A summary of route specific changes:
Route 2: Weeknight service after 7 PM would be improved to operate every 45 minutes instead of every
60 minutes with a later last trip departing Wilmington at 10:35 PM and departing Brandywine Town Center
at 11:30 PM.
Route 5: Routing would be extended from 9th at Market to WTC. Buses leaving WTC to Christiana Mall
would follow Walnut St and out 4th St.
Route 11: The first morning trip would begin and end on Lea Blvd. at Washington St, not serving
Rockwood Office Park due to low ridership.
Route 14: A new weekday rush hour trip would serve Riveredge Business Park to meet shift times at
Zenith. The trip would depart Miller Road Shopping Center at 5:45 AM, arrive at Riveredge Business Park
at 6:29 AM and end at DHSS at 6:40 AM.
Route 28: A.I. DuPont Children’s Hospital would be served at the main entrance.
Route 33: Two mid-day and two evening weekday trips would no longer serve Fairplay Station due to low
ridership.
Route 43 & new Route 63: Route 43 service would be scheduled to operate during weekday rush hours
connecting Amazon with Odessa Park & Ride. The routing would be revised so that all trips to Amazon
would operate via Industrial Drive. The new weekday Route 63 service would be the neighborhood
connector, by serving Odessa Park & Ride, and offering new service to Broad St., Appoquinimink
Community Library, Middletown Square and Middletown Village. Both routes would provide access to the
Westtown Shopping Center, MOT Industrial Park and Amazon. Route 63 would operate between 5 AM to
10:30 PM.
Route 45: Route would be merged into Route 301. See Intercounty Route 301 for details below.
Route 47: Additional weekday trips would be scheduled from Wilmington to Middletown (6:12 AM and 6:42
AM) and from Middletown to Wilmington (4:05 PM, 4:30 PM, and 6:45 PM). New Route 47X would operate
express service between Middletown and Wilmington via US 301, DE 1, Christiana Mall Park & Ride, I-95 and
I-495. Once the new North Middletown Park & Ride is open, Routes 47 and 47X will provide service to the
Park & Ride.
Route 48: Routing would be streamlined to serve both AstraZeneca and JP Morgan Chase with bus stops on
Powder Mill Rd., rather than going onsite at both locations. 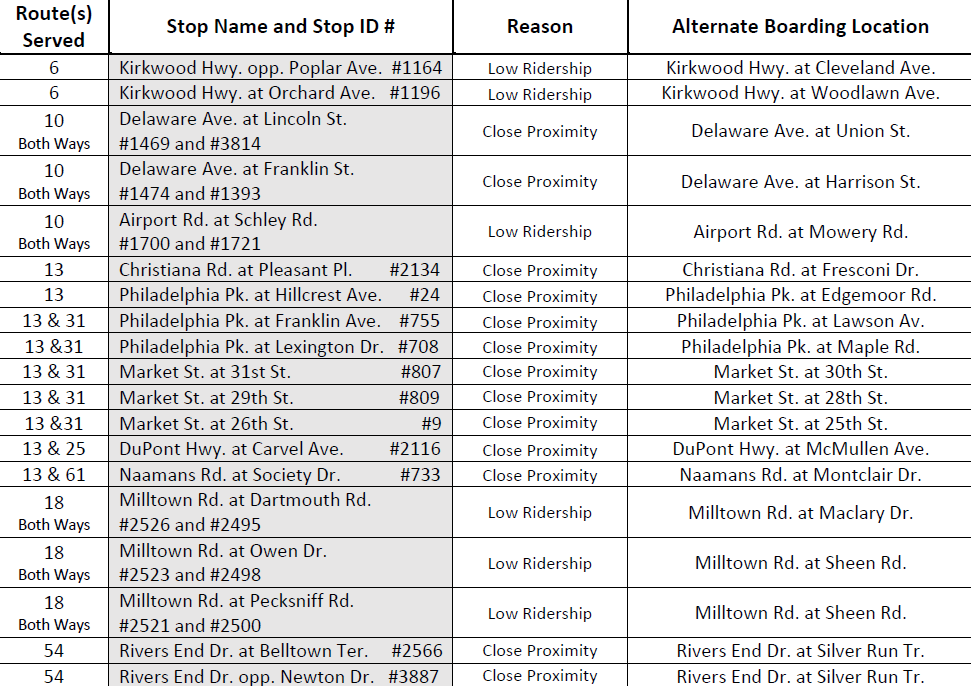 Schedule times would be adjusted on some routes to improve on-time performance and connections.
Route 101: Route would be extended to Dover High School, operating every 60 minutes instead of every 30
minutes.
Route 105: Eagle Meadows would continue to be served via flag stops along Sorghum Mill Rd.
Route 117: Route would be extended to serve the Kent County Library between 9 AM and 7 PM; all other
trips would end at Camden Walmart.
Route 120: An additional weekday trip would depart Smyrna Park & Ride at 6:02 PM to Scarborough Road
Park & Ride.

Schedule times would be adjusted on some routes to improve on-time performance and connections.

Schedule times on some routes would be adjusted to improve on-time performance and connections.
Route 301 (and former Route 45) & New Route 311: Route 45 trips would be merged into Route 301 and
trip times would change. Route 301 would begin at the Dover Transit Center, follow Governors Ave., State
St. and US 13 stopping at Delaware State University, Park & Rides at Scarborough Road, Smyrna, Odessa,
Boyd’s Corner and Christiana Mall, Wilmington Transit Center and the present Downtown Wilmington bus
stops. Route 301 would not serve the state capitol complex and DelDOT/DMV; however, the new Route 311
would serve them. Route 301 Saturday trips would not serve Boyd’s Corner. New Route 311 would operate
as a weekday Express between Wilmington and Dover serving Downtown Wilmington, Smyrna and
Scarborough Road Park & Rides, Dover Transit Center, state capitol complex and DelDOT/DMV.
Route 307: Route would be extended to serve the new South Frederica Park & Ride along DE 1.