After receiving rider feedback at several outdoor Community Conversations and a virtual Public Hearing Workshop, DART has approved the service and fare changes to become effective February 14, 2021. Bold Type indicates a change from or an addition to the original proposal based on public comments.

NEW CASTLE COUNTY
DART bus service will be impacted in New Castle County by DelDOT’s I-95 Rehabilitation Construction project, “Restore the Corridor”. The project begins from the I-495 split south of Wilmington to north of the Brandywine River Bridge. Some routes will be redirected away from I-95 to/from Wilmington to help with anticipated delays in travel time. In addition, some routes will have trips with low ridership discontinued where warranted. Schedule times on some routes will be adjusted to improve on-time performance and connections.

Route 4 – Weekday service between 9 AM and 3 PM will operate every 30 minutes instead of every 20 minutes.

Route 5 – The route will travel directly to/from the Wilmington Transit Center via 4th Street in both directions, no longer serving 9th and Market Streets.

Route 8 – Weekday service after 8 PM will operate every 60 minutes instead of every 30 minutes.

Routes 10 and 34 – Routes 10 and 34 will be combined into a new Route 10. Route 10 will follow its current routing from Wilmington to Christiana and then follow the Route 34 segment from Christiana to the Newark Regional Transportation Center (Newark Train Station). The route will not serve the Newark Transit Hub on-site but using bus stops on Main Street and Delaware Avenue; nor will it serve the Christiana Mall. Mid-day and evening service will be improved on the portion of the route from Christiana to Newark, along with new Saturday service. Weekday and Saturday service will be reduced on the current Route 10 portion from Wilmington to Christiana. Weekday service between 9 AM and 3 PM will operate every 75-90 minutes instead of every 60 minutes. The new Route 10 will offer new travel opportunities from the greater Newark area to the office parks/industrial centers near New Castle County Airport and Wilmington, and a one-seat ride from Wilmington to the DE 273 corridor west of University Plaza, as well as within the City of Newark and the University of Delaware’s Star Campus.

Routes 10, 35 and 52 – These routes will travel via King Street instead of Shipley Street.

Route 11 – Weekday service to Arden between 5:30 and 10:00 AM and between 3:00 and 7:30 PM will be reduced to operate every 45 minutes. Mid-day trips will operate between Wilmington Transit Center and Washington Street at Matson Run Parkway and will be improved to operate every 30 minutes.

Routes 12 and 25 – Routes 12 and 25 will be combined into a new Route 25. Route 25 will operate from Miller Road Shopping Center, through downtown Wilmington along Market Street, and serve the Wilmington Riverfront and DuPont Highway to Wrangle Hill Park & Ride. Route 25 will continue to serve all current Route 12 stops and follow New Sweden Street over the new Margaret Rose Henry Bridge. Route 25 will continue to serve Airport Plaza, Amazon and Llangollen. Tybouts Corner Park & Ride will be served only on weekdays in the morning to Wilmington and in the afternoon from Wilmington and will not be served on Saturdays. The route will now serve the New Castle County Logistics Center near DE 72 and US 13. Service to Delaware City will be replaced by an extension of Route 44.

Route 14 – All trips will serve the Dunleith community in both directions to/from DHSS or Baylor. Service to Cherry Lane, Probation & Parole, Riveredge Industrial Park and Steel Drive will be served by Route 28.

Route 16 – Route will be discontinued due to low ridership. Route 42 will serve the DE 896 & 4 Park & Ride
and the I-95 Service Plaza to Downtown Wilmington.

Route 20 – Six one-way trips will be discontinued due to low ridership.

Route 33 – The routing through downtown Wilmington will change as a result of I-95 construction. Trips will enter Wilmington via Walnut Street and exit via South Market Street. The route will begin and end on King Street at 8th Street, continuing to serve the Wilmington Transit Center. Buses will follow Walnut, 8th, Orange, 9th, and King Streets. Sunday service will be extended to Wilmington from Christiana Mall replacing Route 40.

Route 35 – Weekday service will be reduced to operate every 45 minutes due to low ridership.

Route 40 – Route will now operate via US 40 and US 13 to/from Wilmington to offer Wilmington-bound riders a faster ride during I-95 construction. Trips will no longer serve Christiana Mall or the DE 7 corridor north of Pulaski Highway as it will be replaced by Route 64. From Governor’s Square to I-495, route will operate limited service serving only the following stops: US 40 at Wilton Boulevard (Wilton Walmart), US 13 at Boulden Boulevard/Bacon Avenue and US 13 at Memorial Drive/Hazeldell Avenue. The routing through downtown Wilmington will change, entering Wilmington via Walnut Street and exiting via South Market Street. The route will begin and end on Delaware Avenue at Adams Street, continuing to serve the Wilmington Transit Center. Buses will follow Walnut, 8th, Orange, and 12th Streets.

Route 42 – Route will be extended to serve DE 896 & 4 Park & Ride. The routing in/out of Wilmington will
change, entering Wilmington via Walnut Street to 8th, French and 10th Streets to Delaware Avenue at Adams
St., no longer serving Orange Street. Route will exit Wilmington via 11th, King and South Market Streets.

Route 52 – Eight one-way trips (instead of ten as originally proposed) will be discontinued due to low ridership. The mid-day trips departing Wilmington at 11:25 AM and Centreville at 11:55 AM will be retained.

Route 54 – Service to/from Wilmington will be discontinued. Routing will remain as is through Centennial Village. Routes 33 and 47X from Christiana Mall offer transfer options to/from Wilmington, along with new Route 10 from the DE 273 & 7 Park & Ride.

Route 63 – Route will now serve the Middletown Walmart in both directions.

Route 64 – Route will be extended to serve Christiana Mall and the DE 7 corridor replacing Route 40. Wilton Walmart will no longer be served. Wilton Walmart will no longer be served; however, Route 40 will serve the bus stop on US 40 at Wilton Boulevard. Weekday service will be improved with 18 new scheduled trips; new weekend service will be offered with 32 trips on Saturday and 24 trips on Sunday. The present $1.00 cash fare will increase to $2.00.

SUSSEX COUNTY
Schedule times will be adjusted to improve on-time performance and connections.

INTERCOUNTY
Schedule times will be adjusted to improve on-time performance and connections.

BEACH BUS
DART’s daily Beach Bus service will operate from Monday, May 24 through September 12, 2021. Route 305-Beach Connection will operate Saturdays, Sundays, and holidays from May 29 to September 6, including Monday, July 5.

Zone Reduction – Fare Zones have been reduced from 7 to 3 zones. The new boundary for each fare zone is the county line. For local routes that travel within Smyrna and Milford, and cross over the county line by a short distance, a one zone fare is charged. 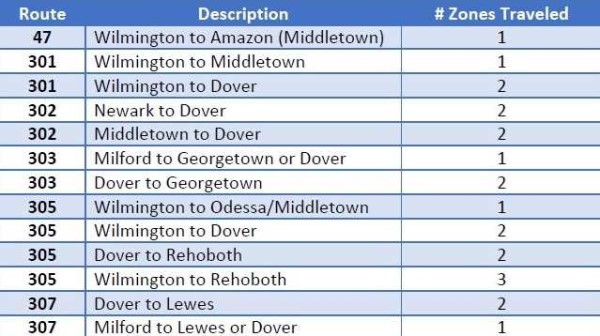 Introduction of a Student Fare – $1.00/zone; cash only
Student defined as a passenger above 46″ in height and enrolled in primary, secondary, private, parochial, charter, trade, college, community college, university or home-schooled full time or part time (children 46” in height or under ride free with a fare-paying adult). Student ID is required for 17 years and older.